“Blessed Is The Nation Whose ~GOD~ Is The Lord” 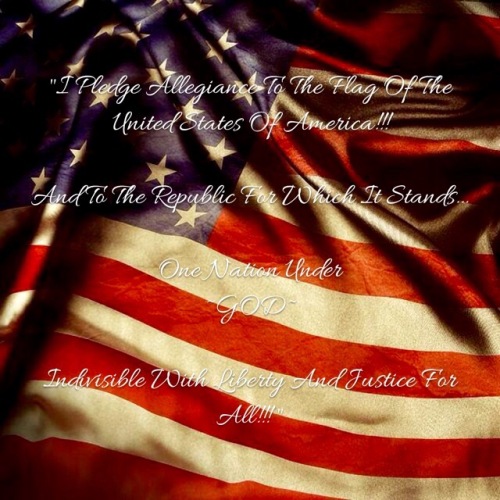 “Our Flag is known as the Stars and Stripes. The union consists of white stars on a blue field, symbolic of a new constellation. Each star represents one individual state and Together They Stand United Indivisible. The stripes represent the original 13 colonies that declared their Independence from Great Britain in 1776. The one official, red, is symbolic for the Blood of those who have given their Lives to Defend and Protect our Great Nation from All of her enemies, both Foreign and Domestic. White represents Purity, Innocence, and Hope. Blue is for Vigilance, Perseverance, and Justice…

But in our hearts Our Flag stands for many things, evident in the Declaration of Independence where All men are Created Equal with rights to Life, Liberty, and the Pursuit of Happiness; the right of the people to Alter or Abolish any form of government that becomes Destructive!!!

Our Flag stands for the Constitution of the United States of America. Freedom of Religion, Freedom of the Press, Freedom of Speech. It provides for Security to All of her Citizens, it also provides for a Fair and Swift trial. It Abolished Slavery and it gives each and every individual of age the right to participate in our Voting Process—to have a say in his or her’s future…

Our Flag is a Beacon, recognized around the world to represent Freedom during times of peace, or during times of war. This is what we Live for. This is what we will Fight for, and if necessary to touch the hand of ~GOD~ in her Defense, the Charge that we accept as Soldiers, Sailors, Airmen, and Marines is a Noble one for there is no heart stronger than that of a Volunteer. Let us Pray that ~GOD~ will reflect with Admiration the Willingness of one nation in her attempt to Rid the world of Tyranny, Oppression, and Misery. It is this (ONE NATION UNDER ~GOD~) that we call, with Honor, the United States of America…”

“Blessed is the nation whose God is the Lord; and the people whom he hath chosen for his own inheritance…”

Do you have questions about a relationship with ~JESUS~ Christ???

Tell us by using the links below:

Have Peace With ~GOD~

Find Your Hope In ~JESUS~ Christ…

This entry was posted in #Gospel, #Patriotic. Bookmark the permalink.