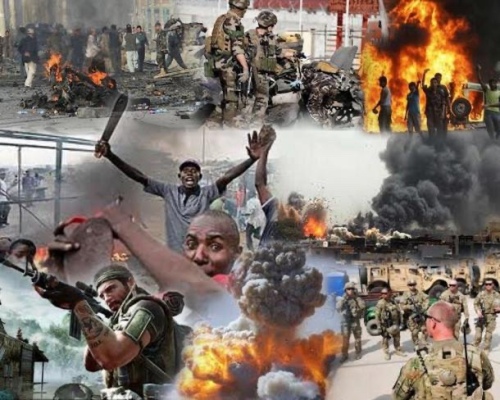 Years ago, I noticed something in Paul’s Second Letter to Timothy. It struck home in a big way, and to this day directs my thinking about Bible prophecy. In the third chapter, there is an intriguing statement: “This know also, that in the last days perilous times shall come.” Probably most serious Christians have noticed this warning, and then have continued to read the long list of character deficiencies that follow:

“This know also, that in the last days perilous times shall come. For men shall be lovers of their own selves, covetous, boasters, proud, blasphemers, disobedient to parents, unthankful, unholy, Without natural affection, trucebreakers, false accusers, incontinent, fierce, despisers of those that are good, Traitors, heady, highminded, lovers of pleasures more than lovers of God; Having a form of godliness, but denying the power thereof: from such turn away. For of this sort are they which creep into houses, and lead captive silly women laden with sins, led away with divers lusts, Ever learning, and never able to come to the knowledge of the truth. Now as Jannes and Jambres withstood Moses, so do these also resist the truth: men of corrupt minds, reprobate concerning the faith…”

This description of latter–day societal shortcomings rings with a surprising familiarity to those of us who observe the daily media parade. As I read this, it occurred to me that I needed to do a deeper study of what the term “perilous times” really meant. Looking it up, I found that the word “perilous” came from the Greek word, chalepos…

Looking further, I discovered that in the New Testament, this word was used only twice, the other time being in Matthew, Chapter–8, in which ~JESUS~ and His disciples had sailed across the Sea of Galilee. A windstorm had risen and swamped their sailboat, until He spoke and calmed the waters:

“And when he was entered into a ship, his disciples followed him. And, behold, there arose a great tempest in the sea, insomuch that the ship was covered with the waves: but he was asleep. And his disciples came to him, and awoke him, saying, Lord, save us: we perish. And he saith unto them, Why are ye fearful, O ye of little faith? Then he arose, and rebuked the winds and the sea; and there was a great calm. But the men marvelled, saying, What manner of man is this, that even the winds and the sea obey him! And when he was come to the other side into the country of the Gergesenes, there met him two possessed with devils, coming out of the tombs, exceeding fierce, so that no man might pass by that way. And, behold, they cried out, saying, What have we to do with thee, Jesus, thou Son of God? art thou come hither to torment us before the time? And there was a good way off from them an herd of many swine feeding. So the devils besought him, saying, If thou cast us out, suffer us to go away into the herd of swine. And he said unto them, Go. And when they were come out, they went into the herd of swine: and, behold, the whole herd of swine ran violently down a steep place into the sea, and perished in the waters. And they that kept them fled, and went their ways into the city, and told every thing, and what was befallen to the possessed of the devils. And, behold, the whole city came out to meet Jesus: and when they saw him, they besought him that he would depart out of their coasts…”

To my amazement, I discovered that the Greek word chalepos was used in the phrase, “exceedingly fierce!”

And fierce they were—so strong that in this territory of the beach and its cliffs, no one could pass. Their strength came from demonic possession!!!

I was immediately struck with the thought that when Paul wrote those prophetic words to Timothy, his exhaustive description of latter–day humanity was constructed around the idea of madness—raging insanity empowered by dark forces! Suddenly, I was deeply impressed with Paul’s true intent: to show Timothy and us, in the twenty–first century, that the days before Christ’s return would be marked by a growing social insanity!!!

And not just that; it would be an insanity driven by the same dark forces encountered by ~JESUS~ and His disciples on the shores of Galilee on that day so long ago…

When this connection struck me so long ago, I began what I called the Chalepos Watch…

Always keeping Paul’s words in mind, I noted social changes and developments that were driven by raging insanity of the sort that suggested the presence of dark forces, working behind the scenes to fragment our civilized society:

The Chalepos Watch is still underway, and I intend to pursue it in the future, just as I have for so many years now. The good news? It is to be found a little farther along in Paul’s letter:

“But they shall proceed no further: for their folly shall be manifest unto all men, as theirs also was…”